Sierra Maria. Velez Blanco - Ascent to the Muelas and to the Gigante. (12 h. aprox.)

We start leaving Vélez Blanco town along the road which makes its way to María town. At the km. nº 7 we shall take the track which goes up to the right.

Along the soft track, the ascent is done without special effort round the Pico de las Tejeras, leaving on the right and on the left junctions and lanes on both sides.

Then the ascent is done without special effort round the Pico de las Tejeras, crossing a brook, we shall walk on up northwards in order to start walking round Muelas.

Walking on along the track, we shall arrive at the Cortijo del Coto shelter, where we can camp.

Its better to do it in a couple of days because then we shall pepare the climb to Muela Chica from the Coto de Montalviche, along the trace which arrives at the shelter to the point situated south east, and from here climb down the slope and prepare for the Muela Grande.

Then we must go back to the track in which we take to the right towards the Gigante, preparing its ascent from the hill where the track arrives at Collado de Talbena, towards the mountain pass between the two summits in the Sierra del Gigante, to subsequently climb the Percaire and the Gigante on our right and our left respectively. 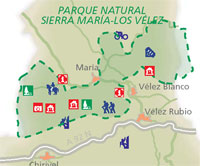