The town of Roquetas de Mar used to be a fishing village and has become a symbol of tourism in the province of Almería. Its new model of development focuses on quality tourism with a great respect for the environment.

The town has existed since Phoencian times, but its current location dates back to Roman times. The Moors built fortresses on the coast, such as Torre de Cerrillos, Castillo de Santa Ana or Las Roquetas. Before gaining independence from the municipality of Felix at the end of the18th Century, the town resisted the British invasion in 1705. It is a must to visit the castle, the 18th Century church of Nuestra Señora del Rosario and the fishing port.

Most of all, the town of Roquetas de Mar is a holiday destination with hotels, golf courses, a marina, beaches, nature and plenty of leisure activities. 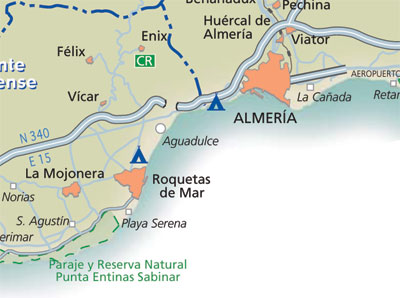