The history of albox goes back to Phoenician times, when sailors using the Guadalquivir river to reach Andalucía, began looking for other routes to the interior, finding Andarax, in western Almería, and the Almanzora. This took early explorers to the Rambla de Albox.

The are many areas along the Rambla del Saliente near Albox in which objects have been found dating back to the neolithic era. The Almanzora river was an important trade route up to and the capital of the region. Its sixteenth century church of Santa María is interesting for its architecture and its original features, although a central altarpiece by alonso Cano is now missing.

There is also the hermitage of San Antonio in the Barrio Alto, built between the seventeenth and eighteenth centuries on the site of an even older mosque, according to tradition. More recently, in the nineteenth century, Albox supported almost three hundred weaving looms, as well as forges, artisans' workshops and factories. To really experience Albox, it is necessary to visit the Santurio del Saliente, which represents the religious aspect of the town and its surroundings. 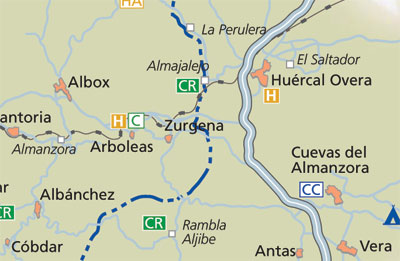