The furthest distance that can be travelled on this island of 581,564 inhabitants and covering an area of some 3,640 km2 is 120 km, which is the distance between Puerto de San Telm and Formentor lighthouse at Cape Formentor.

Most visitors tend to stay around only part of the coastline, many without realizing about the magnificent inland scenery of plains and mountains that can also be enjoyed.

Palma, the island's capital, has a population of approximately 300,000, which is practically half of the entire population of the island. It stretches some 15 km along the coastline, from El Arenal and Palma beach in the east as far as the cosmopolitan districts of Cala Mayor and San Agustivities of all kinds are more than well-catered- for here. There are restaurants, cafeteries, pubs, concert halls, discotheques, a bull-ring and all types of shows, offering the visitor entertainment and amusement at all times.

Tourism had already become an important aspect of life on the island of Majorca back in the early 1920's although on a much smaller scale than today, of course. It was a select, mainly winter tourism which grew up steadily until the begins of the Spanish Civil War. The later "discovery" of Ibiza and Menorca did not occur until well after the Civil War. At that time Majorca was full of artists, who established what was, to all intents and purposes, a colony in and around Pollensa and its port. One of the most famous of them all was Anglada Camarassa. That conglomeration of artists and poets at Pollensa was to bring about something previously unheard of in island tourism - the construction in 1929 of the Hotel Formentor. It was promoted by the Argentinian entrepreneur Adan Dihel, who even suffered personal hardship in his determination to build the finest hotel on the Mediterranean, near a beach which was not really considered the most adequate place for rest and relaxation. The Hotel Formentor brought about a previously unimaginable change in the island's tourist industry, and was soon imitated by the Hotel Cala Dor and the Gran Hotel Camp de mar. These new hotels successfully joined forces with the already-existing Hotel Victoria Gran Hotel de Palma and the Hotel Prp. 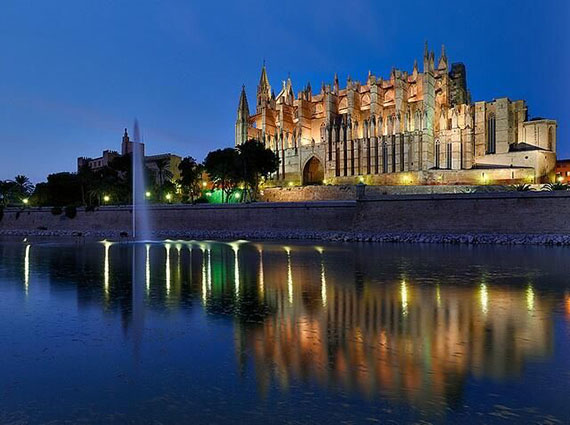 Below you can browse more information about Mallorca and the surroundings. Explore and enjoy Mallorca!