Menorca, with a population of 62,000, is a bright and radiant island bathed by the magnificent Mediterranean sun, which reflects the dazzling whiteness of the whitewashed houses.

The green countryside, the blue sea and sky, and the white of the buildings are the three main colours that go to form the island of Menorca.

A visit to the island is like arriving at a promised land, where everything is simple and nice, as are its inhabitants. Strange as it may seem, Menorca is basically an unknown island in terms of modern tourism. Its rocky and ever-changing coastline is made up of magnificent beaches and coves, some of which are being developed, and others which are secluded and quiet, where man has yet to read.

Thanks to the shape of the island, which is only 47 km long and between 10 and 19 wide, it has a coastline of some 200 km. As a result, the entire island is really all coast. The sea is a constant factor in the life of Menorca, and its numerous coves and natural harbours are ideal for the practice of all kinds of water sports. Menorca presents a fairly level landscape, its highest point being Mount Toro, on the top of which stands the shrine of the island's patron saint. The views from here are quite breathtaking.

The shortest distance from the mainland by sea is via Barcelona, although there is also a ferry service from Palma. In addition, there are regular flights between Barcelona and Mah architecture are a combination of typical island and English characteristics, seen mainly in the streets, where we find houses without balconies, and around the port area, where the houses have sash windows. On the north side of the port stands the San Antonio Estate ("Golden Farm"), which, according to legend, was the residence of Admiral Nelson and Lady Hamilton during their stay on the island. Mahnta Mar of San Bou and Cala's Porter.

Lying inland and not far from Mount Toro, the highest point on the island. Nine kilometers away is Es Migjorn, with the beach of Sant Tomas, and at a distance of 10 km we find the beautiful Arenal den Castell beach.

Located in the centre of the island it has picturesque red and white houses.

This cove, not far from Ferreries, offers the most beautiful scenery with rocks and hundred-year-old pine trees.

A very traditional small town with an interesting cathedral. Nearby is the naveta (prehistoric tomb) of Els Tudons, the largest and best-preseved of its kind. There are also the excellent beaches of Cala Santandria, Alga inhabitants)

A typical fishing village, surrounded by pine groves, with a large natural port. It is a popular summer holiday resort.

Has an excellent beach with fine sands. 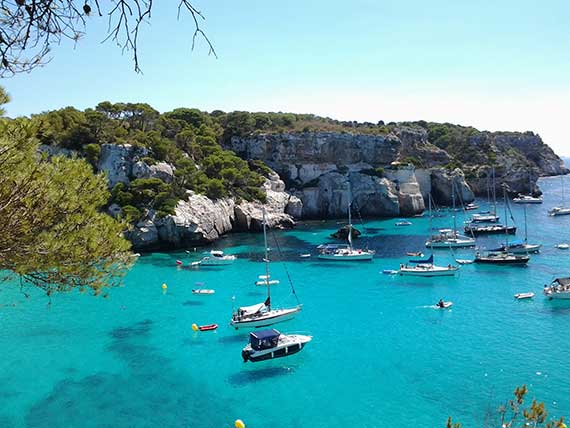 Below you can take a look at some links which may be of interest when visiting Menorca.