The island of Ibiza is the third largest of the archipelago, covering an area of 541 km2, and with a population of over 70,000. Thanks to its hilly terrain the island offers some magnificent scenery of great beauty. There are a great deal of pine forests (the Greeks in fact named the island Pitiusa which means "pinery"), as well as almond trees, fig and olive trees, and also palm trees.

Another interesting fact about Ibiza is that the use of the windmill and the waterwheels is still quite common, mainly due to the lack of rainfall. Rainy days on this island of almost perpetual sun are something of a luxury.The climate is very mild and produces the phenomenon of an everlasting springtime.

The port of Ibiza is 162 miles from Barcelona, 70 from Palma, 100 from Valencia, 101 from Alicante and 152 from Algiers. The journey by ship is a most pleasant experience, thanks to the generally calm sea conditions. The Spanish company Trasmediterranea has a regular ferry service between Ibiza and the ports of Barcelona, Palma de Majorca and Valencia, and this service is increased from spring onwards when there can be as many as four or five crossings a week between Barcelona and Palma.

There is also an excellent airport on Ibiza which is one of the busiest in Spain. The flight from Valencia tales half an hour, while from Barcelona and Palma it tales an hour and approximately twenty minutes, respectively. The airport never has to close because of adverse weather conditions. 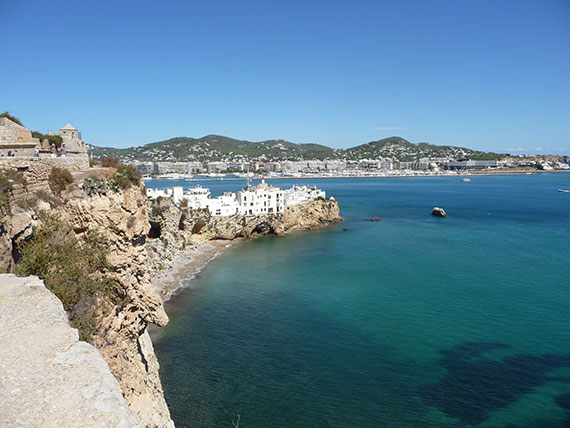 Ibiza is the island's capital and a lively maritime port, built on the side of a mountain beside the sea. It has some interesting districts, such as San Penya, and many magnificent viewpoints that look out across the sea. The white constructions of its popular districts, which were built following the exquisite architectural lines of the islanders, constitute an unmistakable and picturesque urban ensemble.

The district of Dalt Vila is at the very heart of the city and contains some fine aristocratic mansions, the Town Hall, and the Cathedral which was rebuilt in the 17C. Ibiza was founded by the Carthaginians in the year 654 B.C. Its walls were put up in the 16C and are considered a National Monument since they are the only ones of their kind remaining in Europe.

The Archeological Museum exhibits import Punic remains and many others that have come from excavations made on the island. Three kilometres from the capital are the beaches of Talamanca, which can be reached by a frequent bus and motor launch service. In addition there is Figueretas, at a distance of 1 km, and En Bossa (3 km away).

Here can be found one of the island's most beautiful churches, along with the beaches of Cala T,244 inhabitants)

This is the ancient Portus Magnus of the Romans, which today is a lively and cosmopolitan small town. The magnificent church is in the typical Ibizan style, and the Chapel-cum-Catacombs of Santa Inies at the mouth of the only river on the Balearic Islands. It has a beautiful church and the beaches of Cala Llonga and Es Caning steed cliffs. The centre of the island spreads out in a long, narrow depression which runs northwards where it ends in salt pans and two large lakes. The entire coastline is bordered by beautiful beaches with fine sands.

Access to Formentera is via Ibiza. There is a ferry service between the two islands six times a day, and this rises to ten during the summer months. This service is also linked to a bus service that runs between La Sabina, Sant Francesc Xavier and La Mola.

The capital of Formentera is a white hamlet, lying around a fortified church that is of delightful simplicity. There is a splendid beach at Cala Sabina. Visits can be paid in a westerly direction to the wildest part of the island, and there is a vallery that runs as far as Cala Sahona beach which is dominated by the promontory of Cape Punta Rosa.

Here we find the island's only port, consisting of a dozen or so white houses and some small salt silos.

Has a forest of pine trees and savines, as well as Es Pujols beach. Towards the south lies Mitjorn beach and in an easterly direction if the beautiful natural port of Es Cal.