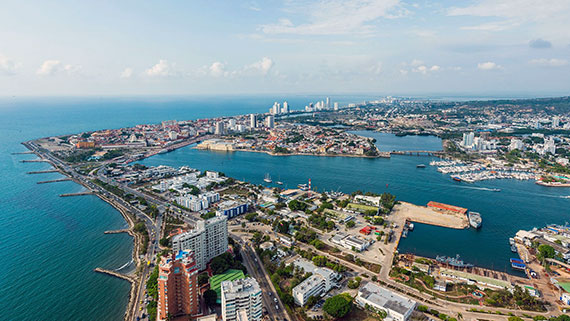 Carthaginians and Romans took an interest in this maritime enclave, from whose Latin title, Cartago Nova, comes its current name. Cartagena was also under Arab domination until Fernando III the Saint reconquered it and incorporated it into the kingdom of Castile. Its port was hugely important in the War of Spanish Succession and the in the War of Independence.

The rich legacy of Cartagena stretches along the shores of its marina. The Sea Wall, built by Carlos III (18th century), marks the boundaries of its historic quarter. Facing the Mediterranean are two features which are clearly linked to the sea: the prototype submarine designed by the inventor from Cartagena Isaac Peral and the National Museum of Maritime Archaeology. This museum, on the Navidad dyke, also houses the National Centre of Underwater Archaeological Investigation. Through its discoveries, we can learn about aspects of naval construction, trade and navigation developed in the ancient world.

The entrance to the town centre is dominated by the Palacio Consistorial or City Hall, a gem of modernist architecture from the early 20th century. On the way to the Torres Park (behind the Sea Wall) is the Old Cathedral. It is the oldest church in Cartagena (13th century), whose remains stand on the steps of a Roman Theatre discovered in 1987. This structure dates from the 1st century BC and is one of the most important in Spain along with the theatre in Mérida. Many of the pieces found on this site can be seen in the Municipal Archaeological Museum, such as altar stones, reliefs and sculptures. Other fine examples of the city's Roman splendour are the remains of the Amphitheatre (in the Bullring), the Molinete Archaeological Zone, the Colonnade of the Lower Moorish Quarter and the Byzantine Wall, which, despite its name, is also Roman.

In Torres Park is the Castle of la Concepción. Standing on a hill, it has been a fortress of Carthaginians, Romans, Visigoths, Arabs and Castilians.

To see Cartagena's modernist architecture, take a walk around calle Mayor, which starts at City Hall Square, and the surrounding streets. Gathered here are the Casa Cervantes and Casa Llagostera, works by the Cartagena architect Victor Beltrí, whose characteristic features are miradors, ironwork and bronze reliefs of allegorical figures. Other buildings representing this artistic trend are the Casino, the Gran Hotel, the Train Station and the Casa Maestre and Casa Dorda. Elegant, middle-class monuments which testify to the economic development of the area at the end of the 19th century and the beginning of the 20th century, based on mining and industry. More aristocratic are the palaces of Aguirre and Pedreño, the first being modernist in style and the other, Neoclassic.

Next to the walled historic quarter is the Military Arsenal, completed during the reign of Carlos III. Its walls house the only entrance gate to the city still standing. Also linked to the history of Cartagena, you can visit the Naval Museum, on the edge of the modern city. Exhibited here are navigating instruments from ancient vessels, maps and charts, alongside models of all kinds of ships. It is also worth visiting the fishing district of Santa Lucía.

The variety of landscapes in the region of Murcia enriches the dinner table where garden vegetables, produce of the sea and ingredients from inland go hand in hand. In Cartagena, without a doubt, salted fish, fish, stews and paellas are the order of the day. The plentiful supply of Mediterranean salt is used when it comes to making salted fish (above all tuna, mackerel or melva) and fish with salt, such as sea bream. Stews of grey mullet, monkfish, grouper... are accompanied by rice, which is cooked in the same juice, and is eaten with garlic mayonnaise. Fig bread is a speciality of the region and the “asiático”, typical of Cartagena, “livens up” a coffee with condensed milk, brandy and cinnamon.

To sample the different cuisines of Murcia you will have to head northwest to visit the Sierra de Moratalla mountains, Caravaca de la Cruz and Calasparra, whose rice is the only one in Spain with its own Designation of Origin standard. Without a doubt, this is the main ingredient of a long list of recipes, such as rice with snails or in a stew with celery and turkey. The fertile plain of Segura leads to towns such as Cieza, Archena (with its spa) or Molina del Segura (with a major golf course), places where asparagus, Swiss chard stew and rabbit with chestnuts are just some of the delicacies. In Murcia's high plateau (to the north) you can visit the historic towns of Jumilla and Yecla. Cities which also have their own Designation of Origin standard wines. Here, "gazpachos" and vegetables accompany dishes of game. The area of arable land provides a great many types of fruit and vegetables, which combine perfectly with its excellent sausages and cold meats. The Parador de Turismo of Puerto Lumbreras, and the towns of the Costa Cálida (Águilas, Mazarrón, San Pedro del Pinatar...) gather together an interesting legacy of historic sites, with exceptional nautical facilities, beaches and a delicious cuisine.