To the northwest of the province of Murcia is the town of Caravaca de la Cruz. Among the houses spread around the castle there are fine examples of Murcia's Renaissance architecture. The area occupied by Caravaca was previously inhabited by the Iberian and Roman Argaric peoples, but the origins of its current appearance are to be found in Arab domination. After the Christian Reconquest, these territories came to be governed by the Order of the Temple and later by the Order of Santiago. In this age, during the 16th and 17th century, Caravaca enjoyed its period of greatest splendour since it became the political centre of a vast territory. This town therefore has a great many historic buildings, the product of its former importance.

One of the main features is its castle, which rises above the houses of Caravaca. Of Muslim origin, it was extended in the 15th century by the Knights Templars and later passed into the hands of the Order of Santiago. Fourteen towers guard the Sanctuary of the Santsima y Vera Cruz, which was built inside in the 17th century. The faade, which was added a century later, is in the baroque style. The whole site has Historic-Artistic Heritage status and houses the Museum of Religious Art and History. Among its most outstanding pieces are the adornments of the Caballos del Vino (wine horses). These horses, lavishly harnessed, are the centre of attention during the Festivals of Santsima y Vera Cruz, declared to be of National Tourist Interest.

A religious building considered to be a crowning work of Murcia's Renaissance architecture is also located in Caravaca. It is the church of Salvador, which has been declared to be a Historic-Artistic Site. Completing the cultural tour of the city are the church of La Soledad, today the Archaeological Museum; the Carmelite convent, founded by San Juan de la Cruz; and the Pursima Concepcion, built in the 16th century on the site of old church of the Knights Hospitaller of San Juan de Letrn. Renaissance in style, inside it has beautiful Mudejar coffered ceilings and baroque reredos.

Caravaca de la Cruz is also the fifth holiest city in the world after Santiago de Compostela, Santo Toribio de Libana, Rome and Jerusalem. This town therefore celebrates an Annus Sanctus every seven years, a time of jubilee and when plenary, solemn and universal indulgence is granted to all those who make the pilgrimage. 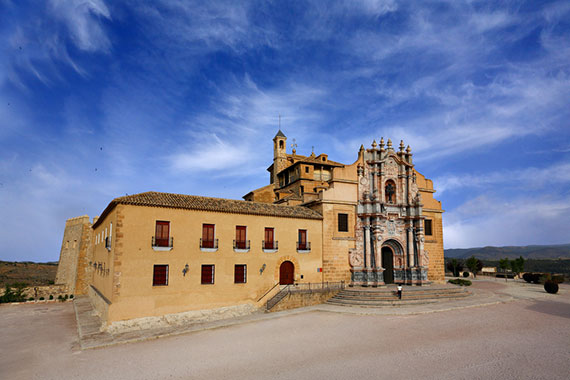 Below is the map of Caravaca in Murcia.

How to get to Caravaca from Murcia airport

Below you can see the road route for going from Malaga airport to Caravaca de la Cruz, Spain. Caravaca is 74.9 km far from Murcia airport, and the trip by car would take about 1 hour. We highly recommend to hire a car at Murcia airport for a more comfortable transporation within Murcia.