Granada is a city and the capital of the province of Granada, in Andalusia, Spain (Andalucía, Spain). As of the 2008 census, the population of the city of Granada proper was 257,663, and the population of the entire urban area was estimated to be 490,439, ranking as the 13th-largest urban area of Spain. It is situated at the foot of the Sierra Nevada, at the confluence of two rivers, Darro and Genil.

Its privileged geographical position makes it the starting point for a whole host of excursions, both inside and outside the province. The ambitious programme of routes opened up by the cultural programme The Legacy of al–Andalus has shown that, using Granada as its historical centre, one can tour round a world of fascinating places.

Here we will perhaps mention those which on no account should be missed: Sierra Nevada, well known during the ski season, though also well worth a visit in summer; the Alpujarras, Granada’s costa tropical; or the nucleus formed by the towns of Guadix and Baza. Along with these essential sights do not forget Montefrío, La Calahorra, Loja, Riofrío and many other towns which in themselves offer a fine day out.

In Granada, The Alhambra, a famous Moorish citadel and palace, is found. It is the most remarkable item of the Muslim, Jewish and Christian historical legacy that makes Granada a hot spot among cultural and touristic cities in Spain.

Granada is also well-known within Spain due to its prestigious university (www.ugr.es) and wild night-life. In fact, it is said that it is one of the three best cities for college students (the other two are Salamanca and Santiago de Compostela).

The pomegranate (in Spanish, granada) is the heraldic device of Granada.

The beauty of the sights of Granada is famous. A well known verse says:

Give him some money, woman
because there is nothing worse in this life
like the pity of being
blind in Granada. 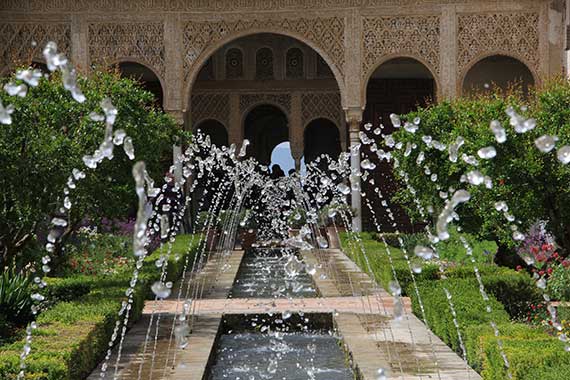 Find below useful links about Granada: