At about 600km from Madrid (the capital of Spain) Barcelona lies on the Mediterranean coast and bordered by the rivers Llobregat and Besos. The city is about 160km from France which can be easily reached by road and at present Barcelona has a population of about 3 million people.

Rent a car in Barcelona downtown from the best car hire companies like Avis, Europcar,Goldcar and many others.

The weather is warm during the summer and winters are mild. Temperatures never drop too low and don´t change much throughout the day. The wettest months of the year are during spring and autumn.

How to get to Barcelona

Barcelona is connected to all the major European capitals and the rest of Spain by regular flights from city´s El Prat airport. During peak times there are flights every 20 minutes to Madrid. An interesting alternative is to fly to the Girona airport which is used by low cost airlines such as vueling. This airport lies about an hour and a half outside Barcelona and provides a cheaper option than the Barcelona airport.

There are many means of public transport available in Barcelona. The company RENFE (www.renfe.es ) runs metro, tram and bus services  to destinations inside the city itself and nearby. All these services are unified so that one ticket can be used on all.
There is also an extensive road system including the Ap7 that starts in Almeria and passes for Valencia and Barcelona before reaching Perpignan in France, the AP2 that connects with Zaragoza, and the A2 to Madrid. This all makes it a very good idea to rent a car in Barcelona and we recommend that you use our car rental search to find a good deal for a car that suits your needs. You will find the best offers available from local companies to help you save both time and money. 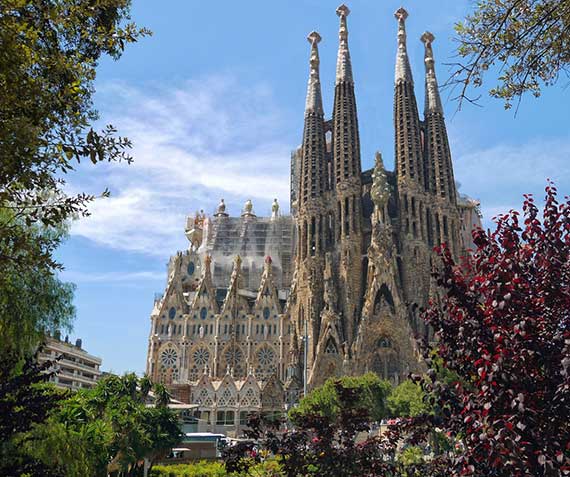 To get anywhere in the city it’s a good idea to have a decent street atlas or local area map. Below with the help of Google we have made available a complete map of the area which also includes some satellite photos to help you.  Just click on the map to enlarge it.

What to see in Barcelona

There are a wealth of leisure and cultural activities available to you in Barcelona. A large number museums display works by well known artists like Pablo Picasso and Joan Miro.One of the most visited places is the F.C BARCELONA MUSEUM which is found in CAMP NOU stadium complex.

One of the most popular zones for tourists is the las ramblas area where you can find stalls selling flowers, birds or almost anything else you can think of. Being such a popular zone its advisable that you take care as there are some pick-pockets that operate in the area.

Thanks to the warm climate it is possible to enjoy Barcelona’s beaches which are easily reached from the rest of the city and are protected by Red Cross volunteers.